Epidemics, Contracts and Force Majure: An outlook from a millenia ago

How to Attract Tenants That Pay on Time

If you’re not asking your collection agency these questions, you’re making a huge mistake.

Epidemics, Contracts and Force Majure: An outlook from a millenia ago 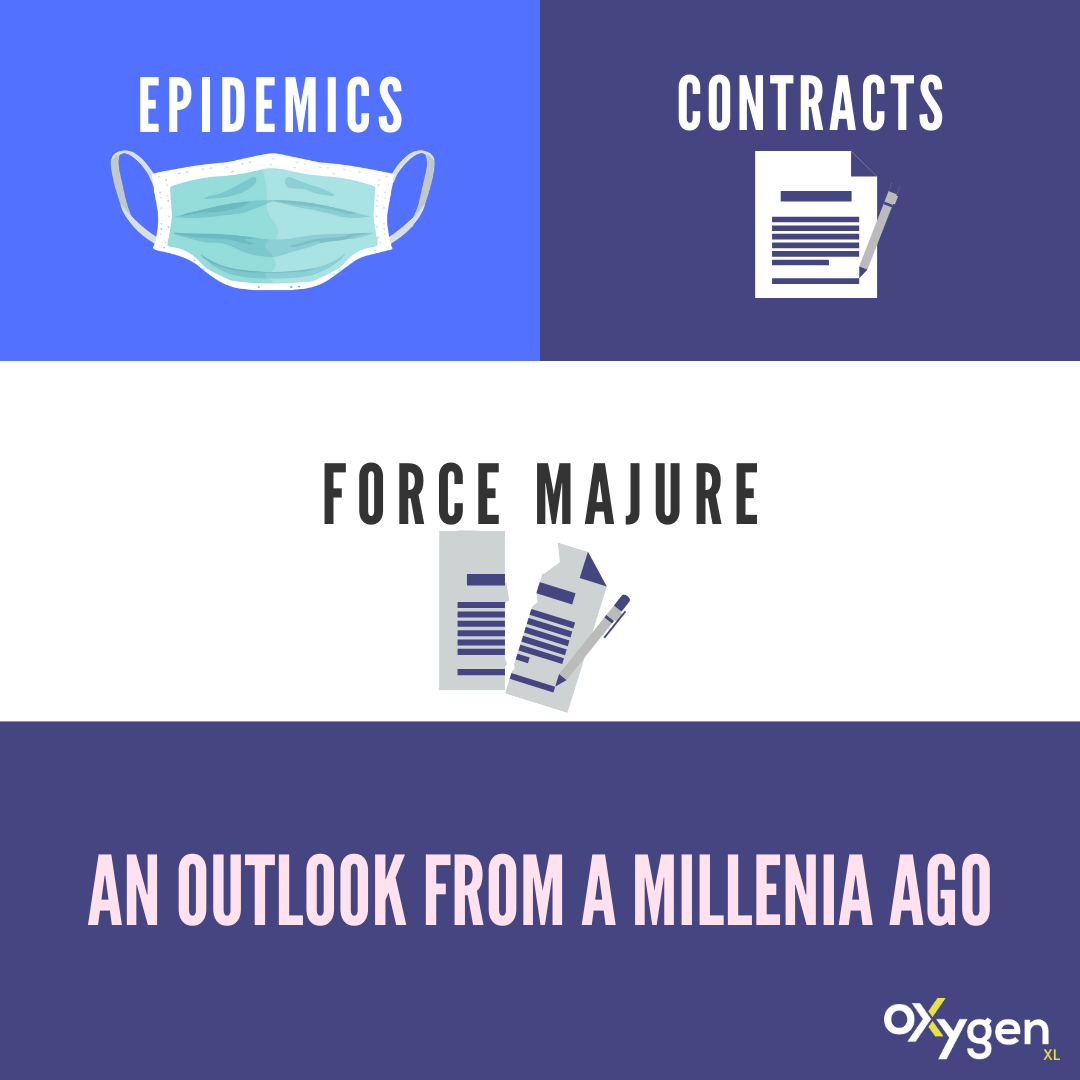 In recent weeks it is hard not to hear in the business community the words force majeure. Contracts that were made with clear plans in mind about the economy and market trends are now abrogated in light of the unprecedented pandemic. This is not a case of clear, cut and dry letter of the law scenario. Far from it, it raises moral dilemmas beyond simple contract law. Imagine the scenario of a young woman who rents a storefront in NYC to open the restaurant of her dreams. She raised capital, hired employees and worked hard to grow her business. But all that came to a screeching halt when she was forced to close because of the pandemic. Even with selling take out food, business revenue is down dramatically. According to her lease she needs to pay rent, but if she does she will have no funds for operations, does the owner of the property have the right to demand payment in full? What are the options here?

In common law, force majeure (lit. superior force) is a concept referring to a clause in the contract allowing the contract to be cancelled in the case of an unforeseeable act of G-d. Clauses of this kind might mention events like: wars, natural disasters or pandemics. The reasoning of this doctrine is simple: an act outside the control of parties to the contract, unforeseeable and not connected to action or lack thereof by the parties, goes to the foundation of the contract and nullifies it.[1]

In the event, the contract is silent concerning Force Majure or act of G-d, common law developed the doctrine of Frustration of purpose, This doctrine allows the cancelation of a contract when all parties knew the reason the parties entered into the contract and that this reason is not relevant due to an unforeseen change in circumstances.[2] The example given by the court in 1863 was: “the performance depends on the continued existence of a given person or thing, a condition is implied that the impossibility of performance arising from the perishing of the person or thing shall excuse the performance.” Take for example a contract for shipping from the U.S. to Colombia. The Colombian government cancelled an import license after the buyer had paid for shipments in advance. The court discharged the contract based on frustration of purpose.[3]

Similar doctrines of impossibility and impracticability deal with conditions that become impossible to perform but all have one point in common, promises are given in a context and need to be interpreted in the context.

This is a difficult situation to deal with and courts are put between a rock and a hard place dealing with surprising scenarios of acts of G-d. Sudden death of a buyer does not fall under this category.[4] In light of this ambiguity It is worthwhile to look at discussions about this issue that predate common law by a millenia, I am referring to talmudical debates on the issue as early as the first century CE.

The equivalent to the doctrines of impossibility and impracticability can be found in the Talmud (Edited in Babylonia in the fifth century CE): “With regard to one who hires a worker, and at midday the laborer heard that a relative of his died and he has to tend to the burial, or if the laborer got a fever and could not continue to work, if he is a hired laborer, he gives him his wage; if he is a contractor, he gives him his contracted payment.”[5]

This principle was codified in the central code of Jewish Law (Shulchan aruch) where both employers and employees can be discharged of their obligations in case of impossibility or impracticability: “Who that hires a teacher for his son, and the student is sick, if it isn’t a chronic sickness [and the same applies if the boy dies], and even if it is regular and the teacher is from the city and is aware of it, the loss is of the teacher. But if it is a regular sickness, and the teacher is not aware of it, for example that he isn’t from the city, the loss is on the one who hires him, and he gives to him all the owed wages”. [6]

But what about an actual act of G-d? This is discussed in the Talmud using an example involving a land deal. The parties to the contract agreed to exchange cultivation rights. The farmer agreed to cultivate the land of the owner in exchange for a percentage of the produce. How an act of G-d ensued; be it a plague of grasshoppers or a storm that destroyed the produce.

This ruling was applied to contract of other kinds including service agreements[8], but the extent of the application of this principle is debated. Some legal authorities wanted the employer to pay the full salary asserting different reasonings[9], Others found it difficult to let the owner bear all the responsibility if the impossibility or impracticability of the contract influences all parties involved in the contract, not just one. These authorities summarized that if work was not performed no salary should be paid.[10]

Practically speaking, in light of the differing opinion, one of the great rabbis of the 19th Century, Rabbi Moshe Sofer (the Chatam Sofer), suggested that the proper thing to do would be to split the damage. He lived through the Napolionic wars and when dealing with many contracts that could not be fulfilled he wrote that he can not say with certainty that there is a legal obligation to pay however using his authority as an arbiter he split the damages in half and employers paid half of the agreed price. He himself chose to pay his employees their full salary.[11]

In recent years this issue became relevant in Israel in light of military operations that lead to civilian population in southern Israel sheltering because of rocket attacks from Gaza. Educational institutions were closed and religious tribunals had to determine if the tuition that was paid in the beginning of the year should be refunded in full or partially. Many of the contemporary authorities in Israel concluded that this unusual situation has no clear answer in precedent and therefore adopted the position of Rabbi Sofer to compromise and split the damages. If there is one thing history can teach us is that in situations like this, it creates difficulty for all parties involved, there is no clear right and wrong and the best way to move forward is to compromise and help each other out.

What is the lesson for the collection industry? This legal debate that spanned centuries shows that an act of G-d that puts society in severe turbulence requires both parties to rethink the entire relationship. Business deals are made with a certain set of expectations and the legal system puts a great deal of responsibility on parties to a contract to abide by the terms even when conditions are somewhat different than those existing when the deal was struck. However, a case of force majeure is different.

When the courts are convinced that we are dealing with force majeure either explicitly in the contract or by using doctrines like impossibility or impracticability they send a message that the conditions changed so dramatically that the deal needs to be undone.

Trying to collect a debt from a customer in a time where the market is going through an earthquake can be very challenging to say the least, this is the time to divide risks and to settle!

“We may have obtained a judgment in court, however the judgment is worthless if it’s not enforceable (for whatever reason). Often it can be settled if a compromise is reached. However if creditors are not willing to compromise, then this is typical of ‘we can win the battle but lose the war’ ”, says Jonathan (Yona) Abenson, CEO of Oxygen Recovery Group.

Think about the court system post corona, courts will be backlogged, even if one can get in front of a judge, many will be sympathetic to the debtor and may force settlement on the parties and one that may be more favorable to the debtor.

The close reading of the contract is the foundation of a functioning system of commerce but not when the most basic function of the economy is in a state of flux possibly never returning to the way it was. The courts are managed by human beings and they, like everyone else recognize that the rules of the game have changed.

In the context of collections, remember that there can be common ground. Mainly, Cleaning up credit histories will be important to debtors when the economy picks up again but that may take time, it is wise to settle with debtors. Don’t let emotions drive the decision making process.

Why do advertising agencies have difficulty collecting on invoices?

If you’re not asking your collection agency these questions, you’re making a huge mistake.

Do you have charge-backs?